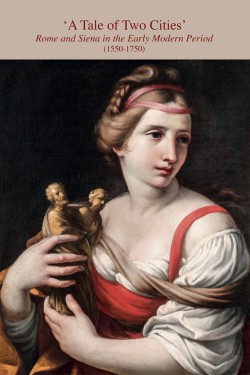 The present volume publishes the proceedings of the International Study Day ‘A tale of two cities’: Rome and Siena in the Early Modern period (1550-1750), hosted at The British School at Rome on October 12, 2017. Borrowing its title from Charles Dickens’ historical novel of 1859, this ‘tale’ sets out to explore the intricate relationship between Rome and Siena in the Late Renaissance and Baroque periods. Chronologically and thematically broad in its scope, research presented in this book unveils and discusses chief episodes in the cultural, artistic, religious and political exchanges between these two cities, spanning the decades from 1555 (the year of Cosimo I Medici’s conquest of Siena) to the papacy of the Alexander VII, born Fabio Chigi (1655- 1667), and beyond.

Reassessing the state of research and delineating the future perspectives in the investigation of Rome and Siena in the Early Modern period are the objectives of Giulia Martina Weston’s essay. A similar goal is pursued by Marco Ciampolini’s contribution, which presents a critical overview of the new acquisitions brought in and favoured by his fundamental Pittori Senesi del Seicento. Unexplored and meaningful episodes in the history of patronage and collecting are discussed in Simona Sperindei’s enquiry into the fruitful relationship between Monsignor Flaminio del Taja and the Sienese painter Domenico Manetti (1609-1663), and in Dario Beccarini’s exploration of the collecting activity of the Sergardi family from Siena, with a special focus on the paintings produced by the Roman artist Francesco Trevisani (1656-1746). Sienese and Roman identities are respectively questioned by Mario Ascheri’s comprehensive reconstruction of Siena ‘moderna’, through the vicissitudes of its aristocracy prior, during and after the Medici conquest, and by Francesco Petrucci’s exquisite survey into Giovan Lorenzo Bernini’s portraits of pope Alexander VII Chigi.

Analysis of unpublished drawings by Francesco Vanni (1563-1610) allows Milena Pagni to cast a brighter light on the creative process which preceded the execution of altarpiece representing the Fall of Simon Magus, painted for the Vatican Basilica. Antonella Pampalone offers a compelling reconstruction of the activity of gilders (doratori) in Cinquecento and Seicento Rome, by bringing to light the production of the Sienese master Guido Visconti. While Annalisa Pezzo’s essay provides a new insight into the artistic bonds between Francesco Rustici (1592-1626) and Orazio Brunetti in both Siena and Roma, Pierluigi Carofano’s enquiry focuses on Rustici’s Roman period as well as on the artist’s peculiar and delicate stylistic cipher. Niccolò Tornioli’s artistic legacy is investigated by Simona Sperindei in her essay devoted to the figure of Carlo Maria Lamparelli (1654-1727), while Valeria Pagani’s meticulous research into the 18th-century print collections of Giulio Corti and Giovanni Gori Gandellini, both from Siena, provides essential historiographic and methodological ground for further investigations.

This miscellany is meant to offer, in addition to a significant scholarly contribution for a deeper understanding of the bond between Rome and Siena in Early Modernity, a new platform for knowledge sharing and cross-disciplinary projects.